The indicator shows the speed of price change in points per minute. The general idea is taken from the Average
Speed indicator, but the code has been improved, and the functionality has been expanded. In addition to the average price speed, which
may be interesting for evaluation of trends, the peak speed has been added to the new indicator, which allows implementing breakout and
pulse strategies.

Estimation of the peak speed is found based on the difference between high and low prices of each candle (this is the maximum distance that the price
covers for the duration of the timeframe). This is an estimate, not an exact value, and the estimate is the lower bound, since in most cases,
time passed between high and low moments is much less than duration of the candle (timeframe), that is, the speed is actually higher. Smaller
timeframes are not analyzed by the indicator.

In addition to the real peak speed in the direction of the candle, the indicator calculates false peak speeds, which are formed during the
movements from open to first extremum (high or low, depeding from candle configuration) and from second extremum to close – both in the
direction opposite to the real type of the candle.

To facilitate decision making (how important are real and false peak speeds), the indicator additionally calculates the standard
deviation of peak speeds for a given number of bars – it is displayed as a corridor of dotted lines. 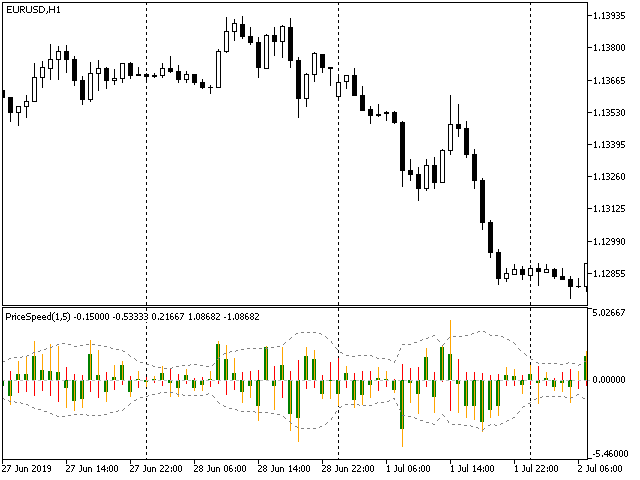