W.D. Gann was a famous trader who developed several technical analysis tools and techniques. One of these tools was the swing-chart, which can be used to identify the trend as well as to trade with it. A swing chart is constructed by first coloring the bars in comparison to their preceding bar as follows:

This implementation takes care of the corner cases in the description (e.g. defining an Upday as a day where the high is higher and the low is higher or equal) and makes sure that the ZigZag obtained has price maximums and minimums on the peaks and troughs. It does not redraw previous swings, but several new peaks and troughs can come in a “burst” in the case of several inside-days and up/down-days without a new high/low. 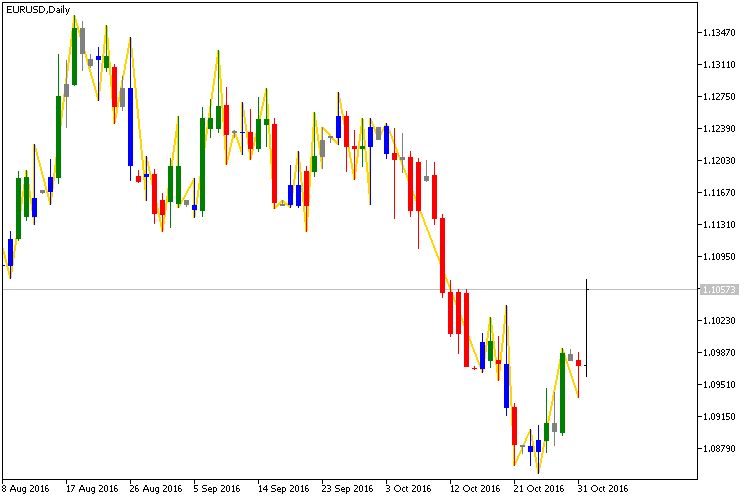 The trading system associated with this (and ZigZag in general) indicator is as follows:

Comparison to Other ZigZags:

When it comes to a ZigZag for use in technical analysis, EAs and indicators, there are some desirable properties which include:

The standard ZigZag draws nicely formed swings but is known to be able to redraw itself. Therefore it is not as useful for trading as it is for analyzing past price series. The FastZZ (and ZigZags like it) work by defining retracement size and considers price only. If set too high, many significant peaks and troughs can be skipped, and if set too low there can be irrelevant peaks and troughs. The Swingchart ZigZag can be seen as a mid-point between these two, not redrawing itself but also capable of considering a dynamic price range. Its main advantage is that it finds all relevant peaks and troughs and can be used in other applications which require a fine-grained peak/trough ordering.